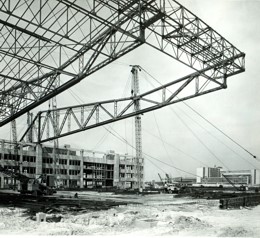 In 1956 the then Minister of Transport Edward Anseele approved the construction of a new airport. Melsbroek was gradually becoming too small and would certainly not be capable of processing the large flow of tourists for the 1958 World Exhibition. The foundation works began in April 1956. Many houses had to be expropriated for the airport's expansion. On 30 May 1958 Anseele formally handed over the new airport complex to the RLW/RVA.

The terminal with the wonderful departure hall was designed by the architect trio Maxime Brunfaut, Géo Bontinck and Joseph Moutschen. Typically for Belgium, the trio represented the different regions in Belgium with one architect from Brussels, one from Flanders and one from Wallonia. Via the roof terraces of the two piers pedestrians could get very close to the aircraft to wave goodbye to their uncle or aunt missionaries who left for the colony. In the early 1960s, a ticket to the terraces cost 5 Belgian francs.

Runways and hangars were adapted to the needs of the jet age. The first Sud-Est SE.210 Caravelle (F-BHHH) landed at Melsbroek on 25 July 1956. When Sabena placed an order for Boeings B707 it was clear that the airport needed longer runways. New hangars had to accommodate the jetliners. Hangar 40 was taken into use on 10 December 1964. A free-bearing roof covers a surface area with the size of "La Grande Place" (Central Square) of Brussels. Unfortunately this beautiful hangar was completely burnt out in May 2006.

To this day our national airport saw only one dramatic air crash. A small memorial in Berg (Kampenhout) reminds us of the tragic accident with a Sabena Boeing B707 on 15 February 1961. 61 passengers, 11 crew and one farmer lost their lives in the crash.

On 2 July 1970 the first jumbo jet landed at Zaventem. After the Pan American "Clipper Red Jacket" parked near the then south finger all but the entire airport community gathered around the aircraft. As from 1972 the RLW/RVA provided a special terminal for the growing sector of business aviation. On 25 June 1973 the Satellite was taken into use to give the airport at Zaventem more space to receive the growing number of wide-bodies. With this extension the capacity was increased from 6 to 8 million passengers a year. With the Jumbos operated by Braniff International and People Express international travel now also came within the reach of backpackers. 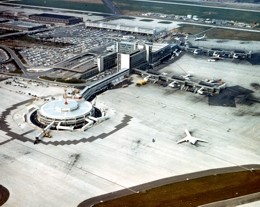 At the end of 1979 Brucargo was opened. Today the 25 square meters reserved for cargo at Haren in 1924 have grown into a cargo complex of over 100 hectares. Hangar 41, designed to accommodate Jumbos, was put into use in April 1983.