Brussels Airport is to the north-east of Brussels. The airport area is on the territory of Zaventem, Machelen, Steenokkerzeel and Korteberg and covers 1,245 hectares. 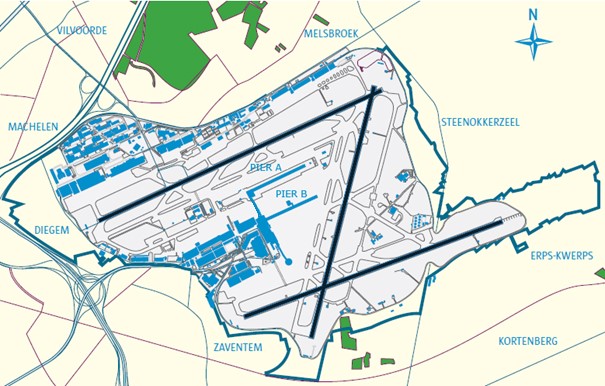 Brussels Airport has a runway system with 3 runways which together form the shape of a Z: the two parallel runways 07L/25R and 07R/25 L and the transverse runway 01/19.

All of these runways can be used in either direction. One of the two complementary names is used depending on the direction of use.

The figures correspond to the angle formed between the magnetic north and the flight direction of the aircraft divided by 10. Letters are added if two or more runways are parallel to each other.

Why do aircraft at Brussels Airport usually land from the east and take off towards the west?

Landing and take-off preferably take place into the wind, although a deviation from this can be made in low winds. Because the wind at Brussels Airport mainly blows from the south west, the aircraft generally take off in a south-westerly direction and land from the east.

During the night and at the weekend, when there is less traffic, deviations are made from this general rule. With the intention of distributing disturbance by noise as much as possible, the federal government has imposed a specific preferential runway system, better known under the English abbreviation PRS.

You can find more information about the runway use at Brussels Airport on the website www.batc.be.