In November, Brussels Airport welcomed more than 1.1 million passengers, 56% of the total of November 2019, before the Covid crisis.  This is the fifth consecutive month that passenger totals were above a million. Cargo continues its month-on-month growth, with a growth of the total volume in November of 20% compared to November 2020.

As this year the end of the autumn holidays fell in the first week of November, Brussels Airport welcomed more arriving than departing passengers. The passenger figures were lower in the second half of the month than in the first half because of the holiday period and the still hesitant recovery of business travel in this period of the year.

The ten most important countries in November were Spain, Italy, Portugal, France, Turkey, Switzerland, Morocco, the United States and the United Kingdom. In particular, Morocco (102% of the number of passengers in 2019), Turkey (80% of 2019) and Spain (79% of 2019) are doing well. The number of passengers travelling to the United States was 45% of the number in 2019. The ten most popular destinations in November were Madrid, Barcelona, Lisbon, Milan, Rome, Malaga, Istanbul, Geneva, Frankfurt and Tenerife.

Transfer passengers accounted for 16% of the departing passengers; that share is lower than in 2019 due to the faster recovery of local traffic.

The total cargo volume at Brussels Airport also showed a strong growth in November (+20% compared to 2020). The growth in air cargo (+ 23%) is most notable in the full-freighter segment (+ 55%) and in the volume of cargo on board passenger flights (+ 41%) which is continuing to recover thanks to the growing number of passenger flights. The express services experienced a slight decline (- 4%), but the volumes remain high.

In the full-freight segment, Brussels Airport is seeing growth among almost all existing customers, such as Qatar Airways, Ethiopian Airlines, Singapore Airlines and Sichuan Airlines.  The routes from Asia and North America were the main contributors to the additional growth. Asia remains the most important region, followed by North America and Africa.

The transport of Covid-19 vaccines to and from Brussels Airport continues; more than 750 million vaccines have been handled since the start of vaccine transport in November 2020, whether for import, transit or export. 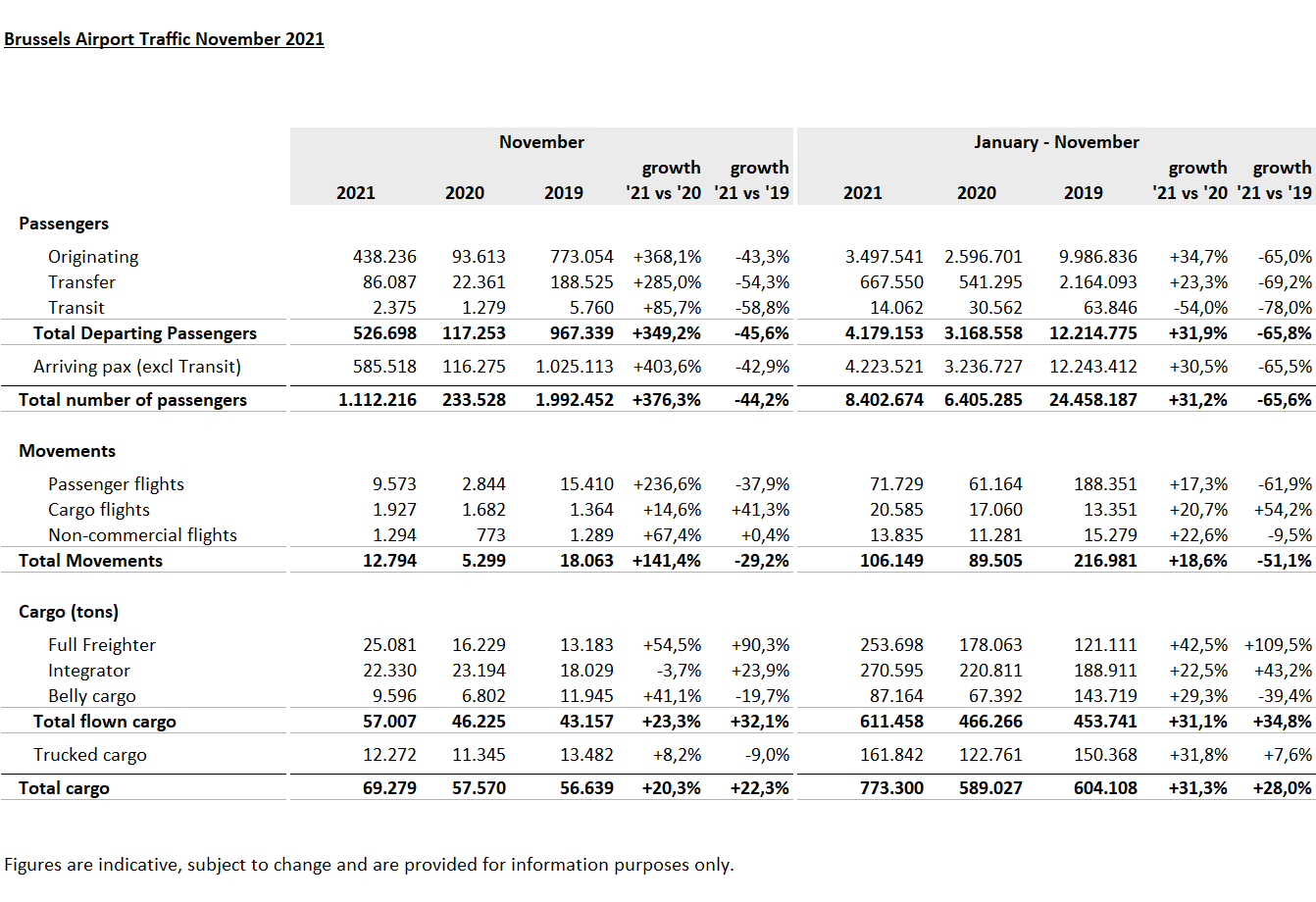