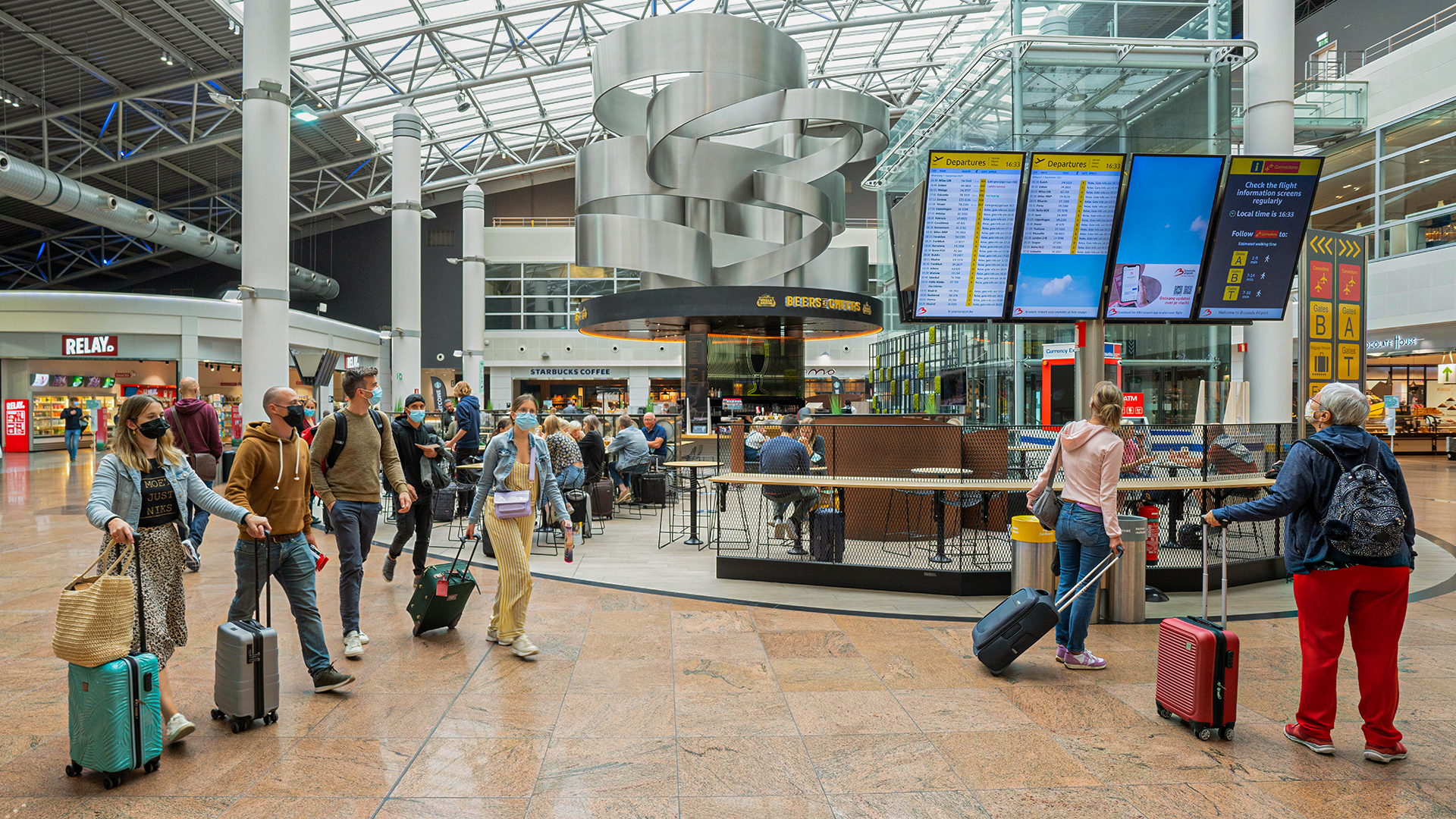 After an already busier July, the passenger numbers rose in the month of August to 56% of the passenger number of August 2019. No fewer than 1,469,406 million passengers travelled via Brussels Airport. In addition to the holiday season, the weather in Belgium also played a role in the demand for sun destinations. Air freight continues to grow strongly month after month, with an increase of 34% in volumes compared to August 2020.

“With 2.7 million passengers at Brussels Airport this summer holiday, we have finally been able to set a real relaunch in motion, together with the partners at Brussels Airport. We have not yet reached the 5.3 million of a normal summer, but the confidence in travelling is recovering and this summer again demonstrates that this, with vaccination and/or testing, can be done safely,” says Arnaud Feist, CEO of Brussels Airport Company. “We hope that even more fellow citizens will be able to enjoy a well-earned holiday in September and October, now that airlines continue to offer a wide range of holiday destinations. Furthermore, we hope that business travel will also be able to restart this autumn. The autumn remains uncertain, but we are ready to welcome all our passengers in the best circumstances.”

Passenger traffic: 56% of the passenger number of August 2019

During this summer holiday, in July and August there were a total of 2.7 million passengers at Brussels Airport. This result far exceeds the forecast for the holiday season which was 2.5 million passengers. It is also a considerable increase in comparison with the summer of 2020, when only 1.1 million passengers travelled via the airport, and more than half of the number of passengers in a normal summer before the covid crisis (5.3 million in summer 2019).

In August, holiday flights, mainly within Europe, again had a positive influence, as did visits to family and friends abroad and travel to a second home. The less favourable weather conditions in Belgium also increased demand for flights to the sun.

The ten most important holiday countries in August were Spain, Greece, Italy, Morocco, Turkey, Portugal, France, Germany, the United States and Switzerland. Greece (89% of 2019) and Morocco (133% of 2019) continue to do very well. The share of departing transfer passengers, 15%, is the same as in 2019.

Cargo: increase of the total volume by 35%

The growth of freight volumes continued in August (+35% compared to 2020). The expectation is that this trend will continue in the months ahead, due to the large demand for air freight capacity. The growth in air freight (+34%) can be seen in all three segments, in full freighter (+ 40%), integrator services (+ 17%), and also in the freight transport on board of passenger flights (+ 76%) which is recovering further thanks to the expansion in the number of passengers flights, although these volumes remain 33% lower than the volumes in August 2019.

In the full freight segment there has been a growth with nearly all existing clients. It is the new routes from Asia in particular that contribute to this extra growth. Asia remains the most important region, followed by North America and Africa.

The transport of Covid-19 vaccines to and from Brussels Airport continues; until now, more than 300 million vaccines have been handled at the airport.

The number of cargo flights (full freighter and integrator services) was higher in August 2021 than in August 2020 (+ 18.4%). The share of flights operated by passenger aircraft only carrying cargo remained stable in August and these remain necessary due to the great demand for air cargo capacity. These aircraft are also frequently deployed for vaccine transport. 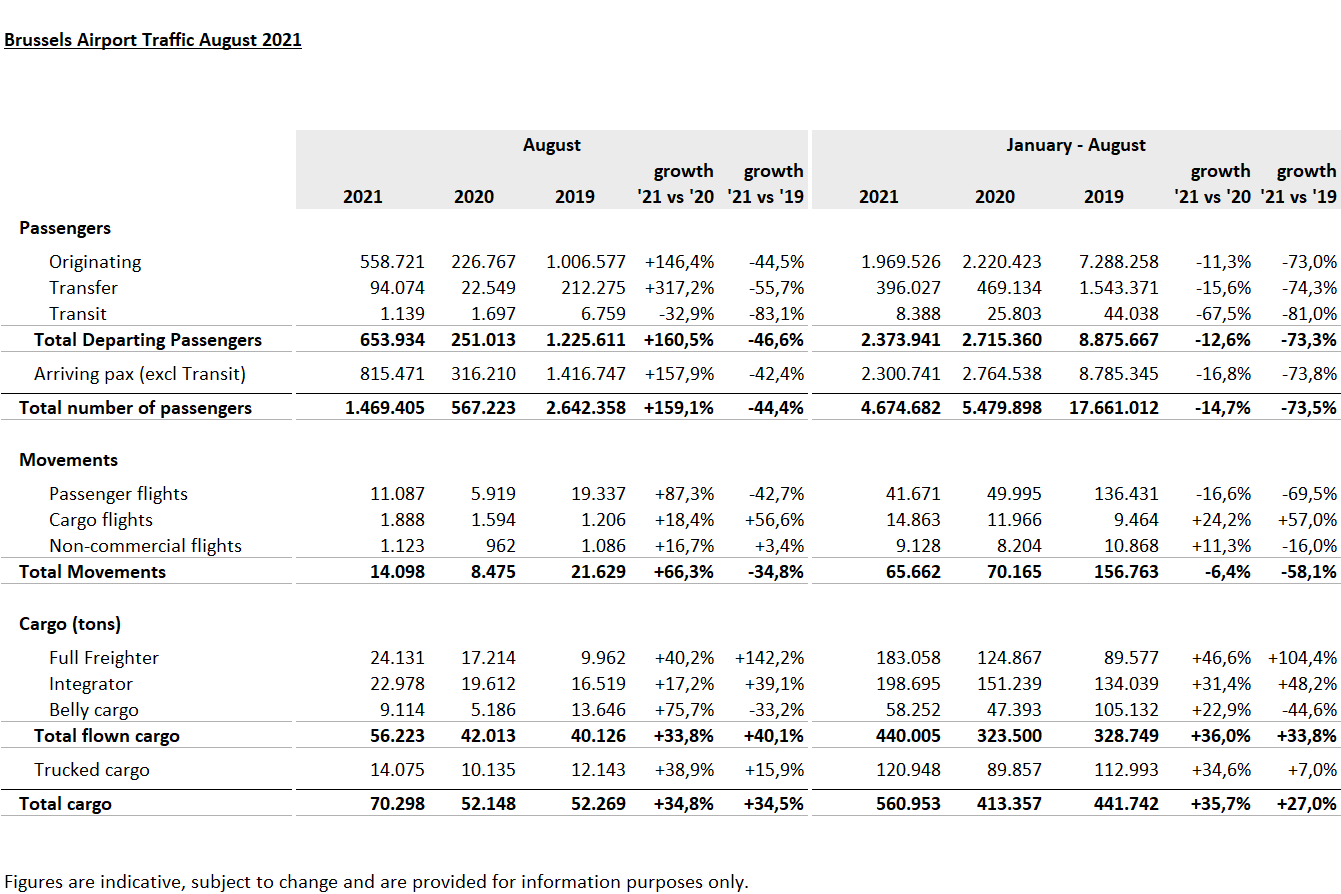