Over 2.2 million passengers at Brussels Airport in October

Brussels Airport is starting the 4th quarter with over 2.2 million passengers in October, up 8.5% on the same month last year. Air cargo traffic on the other hand continues to decline (-3.4%).

This strong growth is attributed to the increase in both short-haul and long-haul flights operated by Brussels Airlines and the considerable growth in long-haul flights at Brussels Airport. The low cost segment on the other hand continues to decline through October. This is explained by the decrease in the number of flights operated by Vueling and easyJet compared to October 2016.

Cargo transport at Brussels Airport continues to decline with a 3.4% decrease in October 2017 on October last year. Just as in previous months, this can be explained by the departure of several airlines as a result of the noise fines imposed by the Brussels Capital Region.

In October, the full-freighter segment in particular has recorded a sharp drop (-23%) in line with the decline registered in September. Conversely, belly cargo - cargo carried on board of passenger aircraft - increases by 7.5% compared to October last year. This is explained by the impact of the terrorist attacks of 2016 and by the increased number of long-haul flights and the additional belly capacity they provide. With an 8.3% growth recorded in October, integrator traffic confirms the positive trend of the past few months. 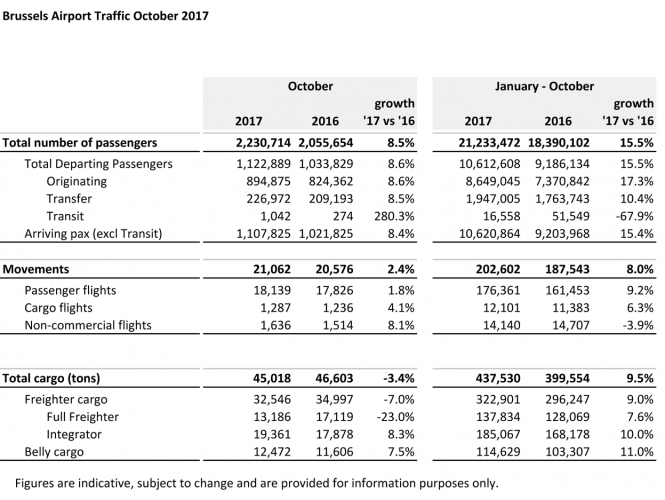 Over 2.2 million passengers at Brussels Airport in October