Limited impact of coronavirus on the February passenger numbers, the next few months look set to be more challenging.

Brussels Airport is continuing to inform, sensitise and prepare all players at the airport.

In February, Brussels Airport welcomed over 1.7 passengers, up 6% rise on February 2019. However, this result should be put in perspective, in amongst other things because of the shift of the mid-term break and the leap year. Without this, growth would have been negative. The next few months will show a bigger impact, in particular due to the cancellation of numerous flights to Italy. Against this background, Brussels Airport is ramping up its efforts to inform, sensitise and prepare all of the airport’s stakeholders, in keeping with the directives issued by the FPS Public Health.

"The aviation industry is going through difficult times," explains Brussels Airport Company’s CEO Arnaud Feist. ‘Brussels Airport’s performance during the month of February fell below the forecasts as result of the impact of the coronavirus. With numerous flights cancelled, the effects will be felt more severely in the months of March and April. We are continuing our efforts to inform, raise awareness among and prepare all of the stakeholders operating at the airport’s, to put in place any additional specific measures required by the FPS Public Health. We are confident that the industry will overcome this crisis, even though it is certain to have economic repercussions for much of the year, in particular on the business travel segment.’

Last month, 1,738,988 passengers passed through Brussels Airport, which represents a 6% rise compared to the same month last year. This growth is seen both in the number of originating passengers and in the number of transfer passengers. It is worth pointing out however that February 2019 witnessed a nationwide strike on 13 February which kept all aircraft on the ground. February 2020 in turn had an extra day (29/02) as well as the mid-term break, which in last year fell in March. Which to a large extent explains last month’s results. The effects of the coronavirus are making themselves especially felt on the flights bound for China and Italy.

As such, the result for February as a whole is lower than forecasted. Without the effect of the leap day and the mid-term break, growth would have been negative. The first indications for March point towards a substantial decline in passenger numbers, particularly in the business travel segment.

In February, the freight volume carried at Brussels Airport totalled 51,343 tonnes, which is a slight 1.6% drop compared to February 2019. Same as for the passenger flights, the impact of the coronavirus has mainly affected the flights from and to Asia. The sector, and the full cargo segment in particular, continues to suffer the effects of the slow-down of the general economic growth. Belly cargo is doing better, same as the express services.

Providing information, raising awareness and preparing all airport stakeholders on how to deal with the coronavirus

Brussels Airport is in daily contact with the FPS Public Health and scrupulously implements all procedures required. The FPS Public Health confirms there is currently no heightened risk for anyone passing through or working at the airport and stresses the importance of good (hand) hygiene.

Brussels Airport is strongly committed to taking preventive, information delivery and awareness-raising measures aimed at its passengers, staff and partners, notably through its internal and external communication channels. Daily meetings with the airport's various operational partners allow the very latest information to be exchanged. The health and safety officers of the companies operating at Brussels Airport have also been attending these meetings and information sessions. As such, they and their teams are ready to roll out the relevant actions in the field if necessary.

As an airport, Brussels Airport is ready to quickly implement any additional measures as may be decided by the FPS Public Health. On the strength of its previous experience, particularly with the Ebola virus, Brussels Airport is ready to act immediately and to co-ordinate efforts to handle such a situation as effectively as possible in tandem with the various stakeholders. 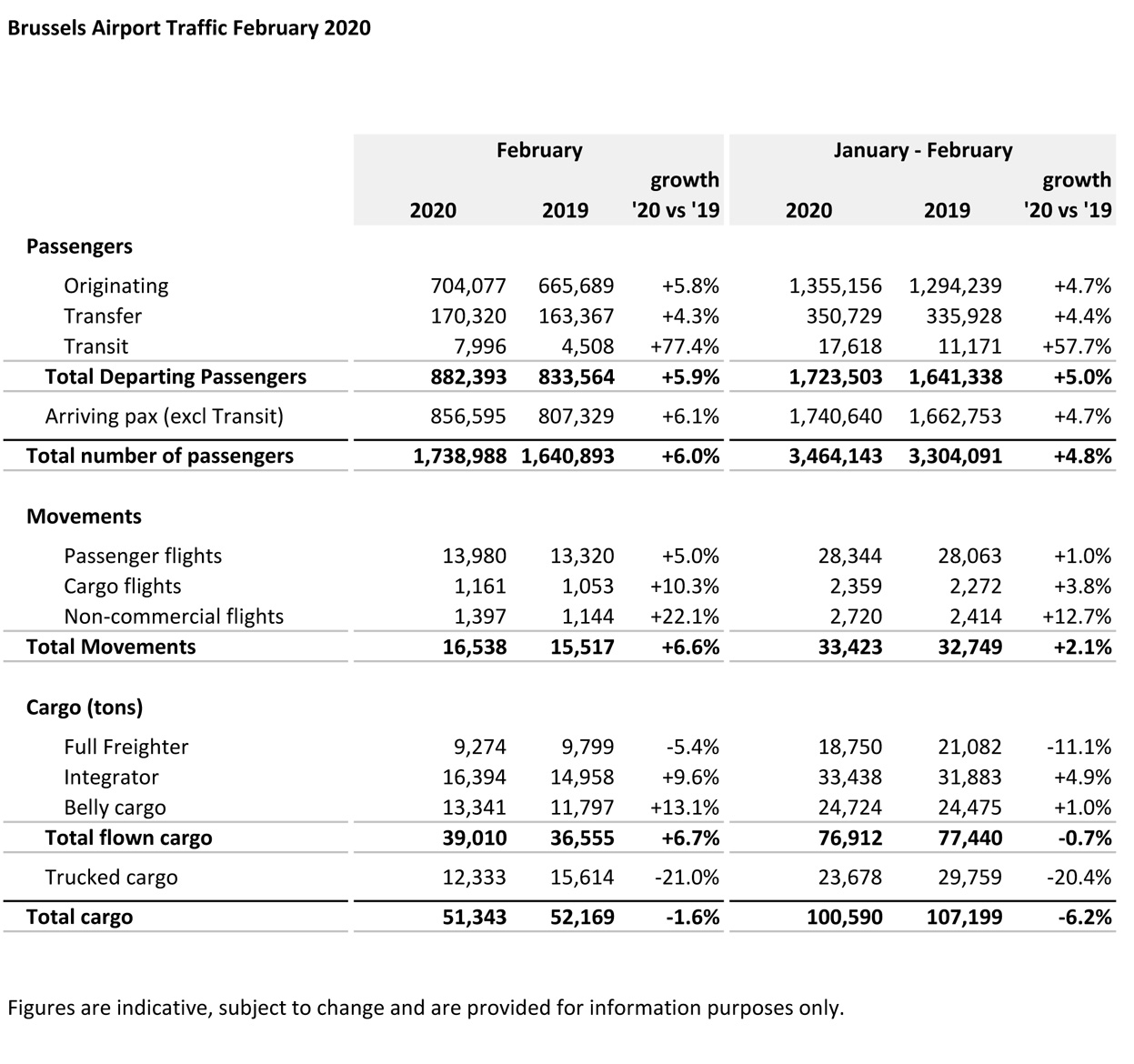 Limited impact of coronavirus on the February passenger numbers, the next few months look set to be more challenging.