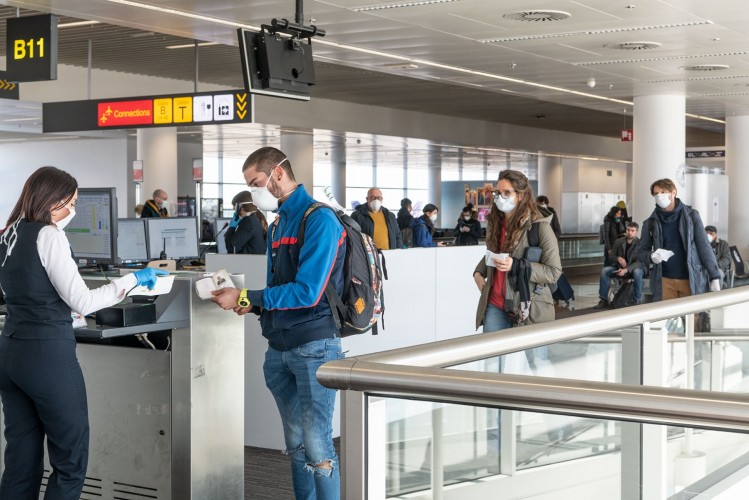 Transport Minister Bellot has confirmed that the airport is considered a public space, where the wearing of a face mask is strongly recommended but not mandatory. Which is logical, considering the low number of passengers that currently pass through the airport. Brussels Airport considers that the wearing of a face mask can be made mandatory by the competent authorities prior to the increase in passenger traffic in the weeks to come. As of 18 May and during the restart of the airport, Brussels Airport will distribute face masks to all passengers and staff.

The Federal Minister of Transport François Bellot has announced yesterday that he is closely following the end of the confinement at the national airport on a Belgian level as well as on a European and international level, where the wearing of face masks is currently examined.

Brussels Airport would like to remind that it is not the airport that decides on the sanitary rules that apply but the competent federal authorities. Since the start of the coronavirus crisis, Brussels Airport is in close contact with the Federal Public Health Service and has always meticulously applied the sanitary rules decided on by the federal government. At this moment, the wearing of face masks in public spaces is strongly recommended but not mandatory.

The National Security Council has indeed decided that as of the 4th of May mouth covers are mandatory in public transport and are strongly recommended in public spaces. Minister Bellot has confirmed that the airport is considered a public space, which is why the wearing of face masks is strongly recommended but not mandatory. This is logical, considering that at this moment very few people are present in the public areas of the airport which makes it easy to respect the social distancing rules in the terminal.

Brussels Airport is ready to welcome the increase in traffic which should occur shortly and considers that the wearing of face masks can be made mandatory by the competent authorities prior to the increase in passenger traffic in the coming weeks.

Brussels Airport has stocked up a sufficient amount of face masks and will distribute them to all passengers and members of staff as of 18 May and during the restart stage.

The airport would like to remind that all necessary measures are already in place in the terminal to make sure social distancing is respected (stickers, plexiglass safety screens at the counters etc.), additional cleaning rounds are carried out and every effort is made to see to it that the small number of passengers that currently use the airport can do so in all safety. At the moment, we only have an average of some 15 passenger flights a day, which means a few hundreds of passengers a day compared to the 80,000 to 90,000 passengers that pass through the airport on a normal day.

The health of our passengers and staff is our number one priority. Since March, about 200 hand sanitizer distributors have been placed in the terminal. We continue to prioritise safety, public health and sensitisation and we count on the cooperation of everyone who visits the airport to respect the safety rules.