In May, Brussels Airport welcomed nearly 2.3 million passengers, slightly up by 0.7% on May 2018. Cargo transport fell sharply by 11% compared to the same month last year. These results were impacted by the various strikes both in Belgium and abroad.

As in April, May's results were negatively impacted by specific developments. Indeed, there were multiple including at skeyes on the morning of 14 May, in Italy and France and at SAS. As far as the airline companies are concerned, the end of flybmi regional operations, the bankruptcy of WOW Air and the reduction in frequency of Emirates flights to Europe due to runway works in Dubai have also reduced the figures for the month of May. Also of note was the decline in the number of holidaymakers in May, a quieter period between the Easter holidays and the summer holidays. Finally, this year, Ramadan occurred almost entirely during the month of May, which also negatively influenced the figures.

Due to holiday periods around May 1st and the Ascension long weekend, there was a big difference between the number of departing and arriving passengers.

Cargo volumes at Brussels Airport were down by 11%. This decline was unfortunately observed in all segments. All regions are showing negative growth, both in terms of imports and exports. All European airports are facing significant decreases, but the results at Brussels Airport are, however, lower than the European average, notably because of strike actions at skeyes which mainly affected the cargo flights, and elsewhere in Europe.

In May 2019, the full-freighter segment experienced a sharp drop of 13.3% in comparison to May last year. For their part, integrator services are facing a sharp decline of 13.2%.

Belly cargo dropped by 4.3%, while trucked freight was down sharply by 12.1%. 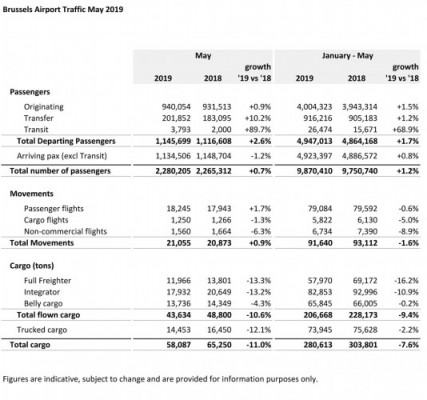