Tests on airport site as of early 2020

The board of directors of De Lijn and the management committee of Brussels Airport Company have given the go-ahead for a pilot project with a self-driving electric bus on the airport. The vehicle that is being developed for this, will be one of the first to drive in Belgium in mixed traffic. After the summer of 2019, tests without passengers will begin at constructor 2GetThere in Utrecht. The shuttle bus will arrive at Brussels Airport in the beginning of 2020 for further tests.

In 2015, Brussels Airport Company and De Lijn entered into a partnership of intent for deploying self-driving shuttles at the airport. After further study and the choice of the constructor, both companies gave full support to the pilot project for testing an autonomous shuttle on the airport grounds. 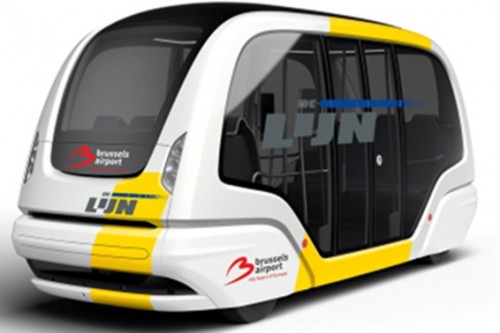 “As intermodal hub where various means of transport connect seamlessly with each other, Brussels Airport is constantly studying new possibilities for expanding this hub in a sustainable way. This technologically innovative project to have a self-driving electric bus operating a fixed route, also fits in with our environmental commitment to keep the impact on our surroundings as low as possible”, says Arnaud Feist, CEO of Brussels Airport Company.

“Flanders is taking on the role of pioneer”, says Flemish Minister for Mobility Ben Weyts. “In other countries driverless vehicles are already operational, but that is often in a separate lane with a steward on board. Here, the aim is to have the self-driving shuttle drive autonomously on the public roads. This is cutting-edge technology that really appeals to the imagination. We are making an investment in the future, in greater efficiency and in a more attractive range of public transport.”

The Dutch constructor 2GetThere will start the project in the coming weeks. The contract is divided into two parts. The first part covers the development and thorough testing of the technology until the middle of 2020. In autumn 2019, the constructor will be holding the first vehicle tests at his own site in Utrecht. If everything works out well, the first self-driving bus will arrive at Brussels Airport in the beginning of 2020 for further test drives at the airport. The test route for this development stage is in the Brucargo business zone.

The first stage with tests and development of the self-driving bus will take two years. In this period, De Lijn and Brussels Airport Company can perform all necessary safety tests in various weather conditions and traffic situations. During the test period, no passengers, visitors or staff will be on board.

Passengers in self-driving shuttle from 2021

If the first stage is completed with a positive assessment, De Lijn and Brussels Airport Company will be able to decide to deploy the self-driving shuttle from 2021 onwards on the airport grounds for the transport of passengers, visitors and staff on the route between the terminal and Brucargo.

Brussels Airport Company and De Lijn are sharing the project costs. De Lijn is paying the costs of the follow-up project for people who travel by public transport (De Lijn, MIVB, NMBS) to the airport. The airport operator will foot the costs for the transport of persons who come to the airport by other means of transport (staff, visitors or passengers).