In March, fewer than 800,000 passengers travelled via Brussels Airport. A considerable drop compared to nearly 2 million passengers in March 2019. The corona virus caused numbers to drop week after week. The last week of March, passenger figures showed a decline of 95%. A drop in demand was also noticeable in cargo transport, which was 14.6% lower than the same month last year. Cargo is crucial in these times for stocking our country, and thanks to air cargo, essential products such as pharmaceuticals and medical products can be supplied quickly. The total number of flights fell by 40%.

Limited number of passenger flights in the safest conditions

In March, the corona virus had a major impact on air transport, and the impact will be even greater in April. In early March, business travel was hit and flights to Asia and Italy, and then came the restriction on flights to the United States. As the month progressed, it became clear that drastic measures would be necessary worldwide in order to block the spread of the virus, and non-essential travel was prohibited.

At Brussels Airport, the government’s health guidelines have been strictly applied. Since the start of the corona crisis, Brussels Airport has been in close contact with the Federal Public Health service and every effort has been made to inform and raise the awareness of staff and passengers. Since the measures were tightened, there has been an increased focus on home working for the staff of the airport, and the necessary operations take place with extra hygiene measures to guarantee the safety of passengers and staff.

In March, 796,743 passengers passed through Brussels Airport, which is a drop of 60.1% compared to March 2019. The number of departing passengers dropped by 62.8%; arrivals also dropped but, due to the large number of repatriations, less sharply by 57.6%.

This drastic decline in passenger numbers meant that the occupation level of flights also dropped sharply: the average number of passengers per flight decreased from 129 to 94.

The decline in passenger numbers grew week by week: in the first week of March, there was a 19% drop, in the second a drop of 39%, in the third week a decline of 73% and in the fourth week we had 95% fewer passengers than in the same period last year.

As a result of the crisis, quite a few airlines found it necessary to cancel flights or to completely cease operations. Since the start of April, only 14 airlines are operating at Brussels Airport. 10 airlines within Europa: Aegean Airlines, Finnair, Alitalia, Bulgaria Air, Ryanair, Iberia, KLM, Lufthansa, Swiss, Croatia Airlines; and 4 intercontinental airlines: Emirates, Ethiopian, Hainan and Qatar Airways. Our country thus remains connected with the world for the limited number of essential journeys that still take place and it is possible for passengers to return to their homeland.

The freight volume at Brussels Airport declined in March 2020 by 14.6 % compared to March 2019. The drop in demand is the consequence of many companies in Belgium and Europe ceasing their operations due to the corona crisis. But there is also a considerable decline in capacity, largely due to a reduction in belly capacity - cargo transport on passenger flights - caused by the cancellation of long-haul flights.

In March, belly cargo decreased by 26.7%. The full-cargo segment declined by 2.1% and the integrator services remained stable with a slight increase of 0.1%.

There was also a considerable discrepancy between cargo flights at the beginning of the month, when the impact was still rather limited, and the end of the month. The coming weeks and months promise to fluctuate considerably. With the reduction in belly capacity, there is an increased demand for full-cargo capacity, but that cannot always be met. There are also routes that have been changed, but new airlines have also started operations at Brussels Airport: we were recently able to welcome Silk Airways, Amerijet and Suparna.

In the current period, air cargo is more important than ever. Thanks to air cargo, we are able to ensure that vital goods, medicines, medical products and food arrive quickly. For several years, Brussels Airport has been the international leader in the transport of pharmaceutical and biotechnological products, key sectors for our country. 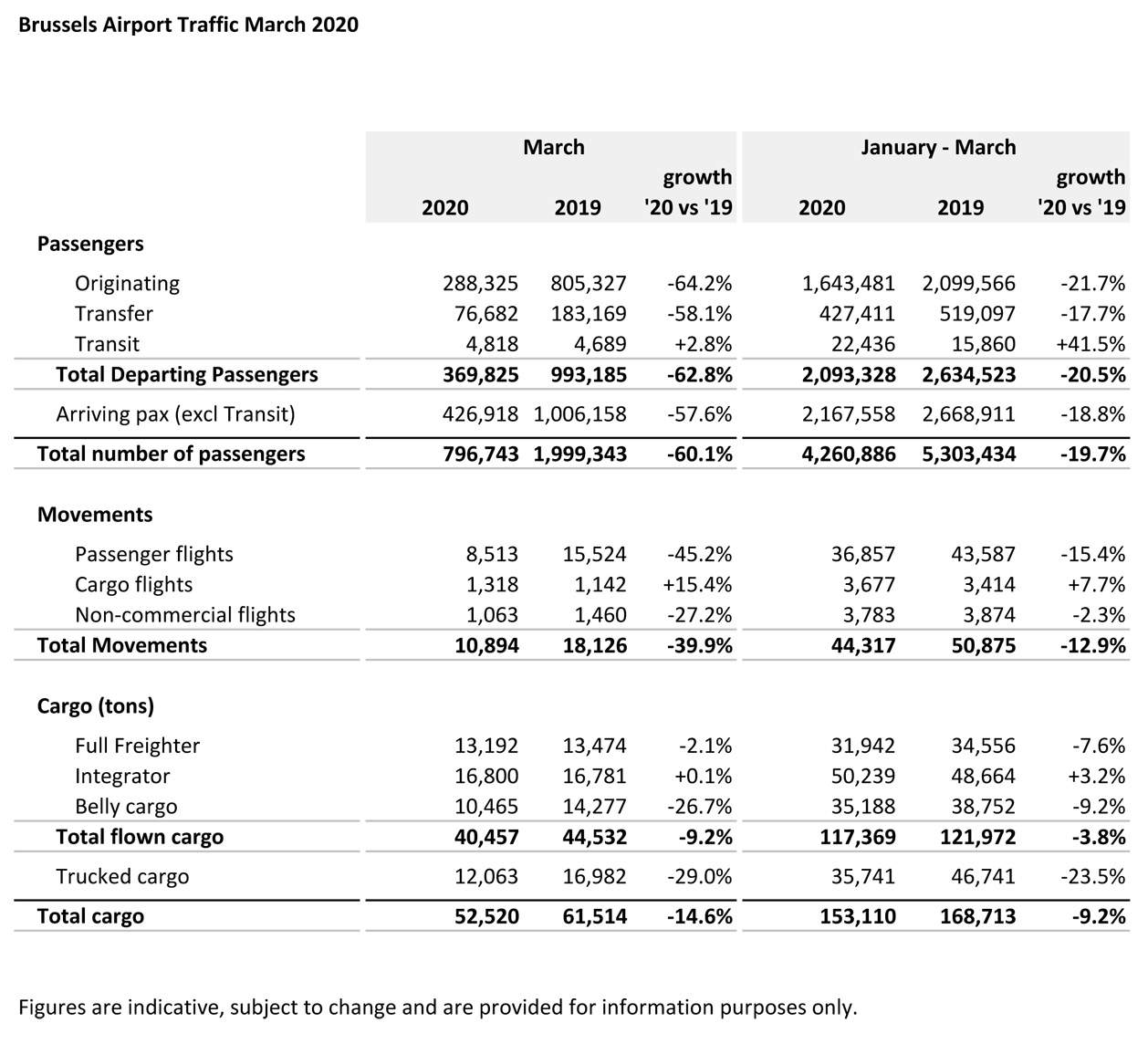