During the two months of the summer holidays, Brussels Airport welcomed almost 1.1 million passengers, down 80% on the same period in 2019 (5.4 million passengers). 567,223 passengers passed through Brussels Airport in August of this year, down by -78.5%. This negative result is largely due to the high volatility of travel restrictions. For its part, air freight continues to make progress, with a 4.7% increase in volumes observed in August.

‘The entire aviation sector is heavily impacted by the Belgian and international restrictions on international travel imposed as a result of COVID-19,’ explains Arnaud Feist, CEO of Brussels Airport. ‘The very frequent changes in the colour codes create uncertainty for potential travellers and discourage many of them. Moreover, Belgium, unlike its neighbours, still does not allow intercontinental travel to the eleven countries declared safe by the European Union at the beginning of July. All this has a huge impact on the passenger numbers for our entire sector. There is an urgent need for harmonisation of travel restrictions at European level, because the current situation is simply untenable for all players in the aviation sector'.

Passenger traffic: numbers still down by around 80%

Brussels Airport is calling for non-essential travel to be allowed to and from the 11 countries declared safe by the European Union: Canada, Japan, China, South Korea, Australia, New Zealand, Thailand, Rwanda, Uruguay, Tunisia and Georgia. Neighbouring countries allow flights to these countries, which creates a significant economic imbalance for the airlines operating at Brussels Airport. On the other hand, Air Canada, United Airlines, Emirates, Etihad, Qatar, Ethiopian and Hainan are again active at Brussels Airport for essential travel, and from 2 October also Delta Airlines.

Cargo: positive growth for the third month in a row

For the third consecutive month, air freight saw an increase in volumes transported, up +4.7% compared with August 2019. With this result, Brussels Airport is doing a lot better than the overall trend since, on a global scale, freight volume is continuing to fall largely due to the very steep decrease in belly cargo, i.e. the cargo on board of passenger aircraft, which covers 50% of the volumes transported around the world.

Express services recorded an increase of +18.7%, while full cargo volumes are increasing by +72.8%. These strong increases compensate for the lack of freight capacity on board of passenger aircraft (-62%). Additional flights are operated by modern full cargo planes, as well as passenger aircraft which are converted for freight transport. These additional operations are mainly carried out during the day, which means that the number of night flights at Brussels Airport is not increasing.

When trucked freight is added (which fell by -16.5%), the volume of cargo transported in August at Brussels Airport amounted to 52,148 tonnes, a very slight decrease of -0.2% compared to the same period last year. 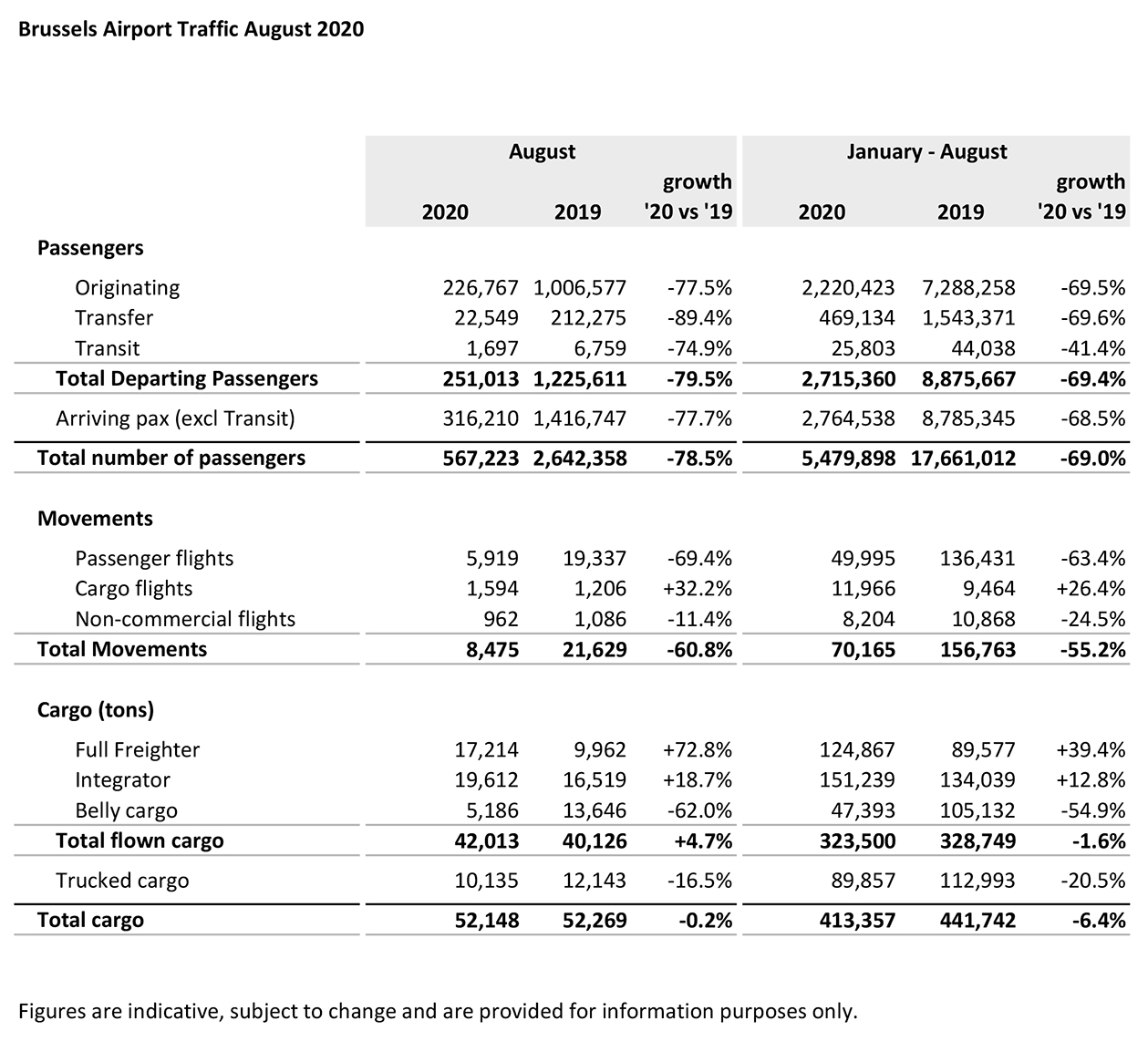